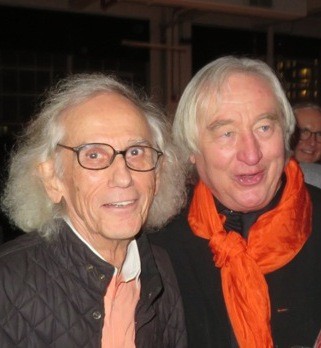 The passing of the artist Christo yesterday at 84 years old is a shock. He is survived by son Cyril, animal rights activist (Jeanne-Claude passed in 2009). Artists of deep conviction and amazing energy like Christo and Jeanne-Claude are rare. They came every year to our office Christmas party in New York December.

In 1977, I drove with Zaha Hadid from San Francisco to Running Fence in Sonoma County. We followed this joyfully amazing billowing fence all the way to the Pacific Ocean as it dove into Bodega Bay.

In 2005, the Gates finally opening in Central Park (the project was rejected in 1981). Michael Kimmelman wrote that the gates were “the first great public art event of the 21st Century”.

While visiting Christo in his white street studio in 2017, he proudly told us protesting the power of President Trump over that site, he has walked away from the “Over the River” project.

He was a unique artist, working with Jeanne-Claude like an architect with workers, locals, and political forces in years of negotiations to realize huge temporary projects. Christo – a unique deeply enthusiastic creator of art of our time will be deeply missed.