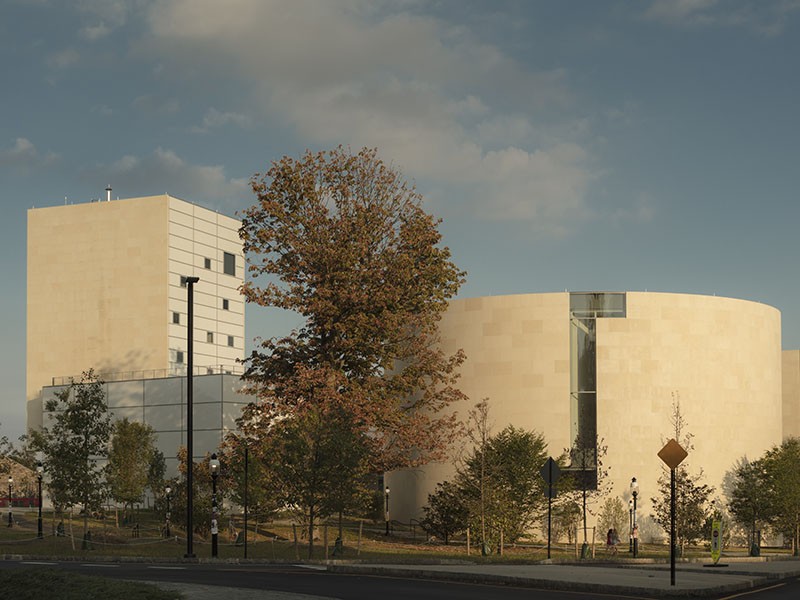 October 5, 2017 — The new Lewis Arts complex, designed by Steven Holl Architects in partnership with BNIM Architects, opens today with a four-day Arts Festival. The complex takes the arts at Princeton to even greater heights by significantly expanding the performance, rehearsal, and teaching spaces in new, state-of-the-art facilities. The complex creates a new campus gateway, shaping campus space while maximizing porosity and movement.

The new multi-building arts complex on the south edge of campus, adjacent to McCarter Theatre Center, brings together the Lewis Center for the Arts’ Programs in Dance, Theater, Music Theater, and the Princeton Atelier, and the Department of Music’s expansion of its instructional and research facilities in the new Music Building. The complex comprises the Wallace Dance Building and Theater; the Arts Tower, which includes the Hurley Gallery, administrative offices and additional studios; and the new Music Building. The three buildings are integrated below ground in a Forum, an 8,000 square-foot open indoor gathering space that serves the various arts venues in the complex. Above the Forum is an outdoor plaza with a reflecting pool. Skylights in the pool filter natural light into the Forum below.

Encouraging curiosity and interaction, the new arts plaza has overlook views into the dance and theater practice spaces and the orchestral rehearsal space. As an open public invitation, this gateway space aims to connect the local community to the University.

“We feel grateful to realize this work as an instrument of inspiration for students of the future,” said Steven Holl.

The Wallace Dance Building and Theater is developed according to the idea of a “thing within a thing.” The black-box theater is comprised of steel, while the dance theaters are foamed aluminum, white washed wood and board formed concrete. A “dancing stair” connects all levels.

The new Music Building is developed according to an idea of “suspension.” Above the large orchestral rehearsal room, individual practice rooms are suspended on steel rods. Acoustically separate, these individual wooden chambers have a resonant quality.

The Arts Tower is developed with an “embedded” concept, its stone tower connecting to the proportions of Princeton’s historic Blair Arch.

"Inspired by the ambition and vision of the University and Lewis Center, we created a performing arts building shaped by porosity and circulation that would interconnect the Arts and the Princeton community in a dynamic new campus space," said Partner Noah Yaffe.

The concrete structure of all three buildings is faced in thick 21-million-year-old Lecce Stone quarried in Lecce, Italy.

The new arts complex is named for and was made possible in part through the $101 million gift to the University in 2006 by the late Peter B. Lewis, Princeton Class of 1955 and former University trustee.

The Lewis Center for the Arts and the Department of Music will celebrate the opening of the new Lewis Arts complex with a multi-day Festival of the Arts from October 5 to 8 on the Princeton University campus. The Festival, which is open to the public, features dozens of concerts, plays, readings, dance performances, art exhibitions, multidisciplinary presentations, community workshops and quirky site-specific events at venues across the campus, most of which will be free.

In addition to these inaugural events, Designing the Lewis Center for the Arts, an exhibition featuring concept drawings, models and construction details, is on view in the CoLAB Forum through November 1.