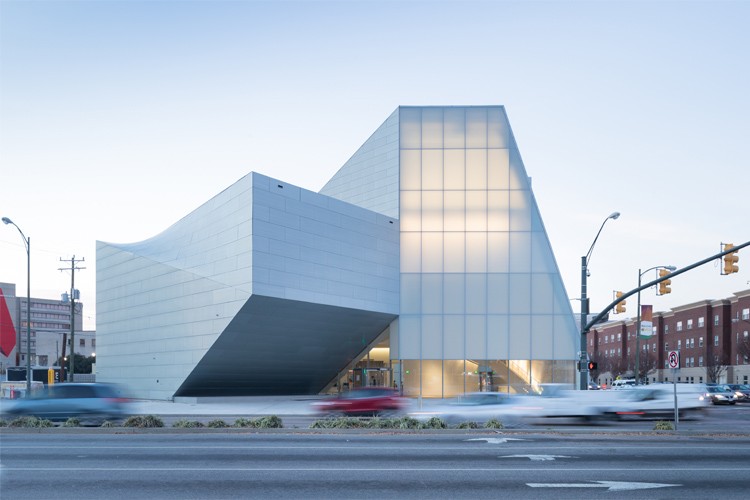 The Institute for Contemporary Art at Virginia Commonwealth University (VCU) has been awarded a 2019 AIANY Award from the American Institute of Architects (AIA) New York Chapter.

Sited at the edge of the VCU campus in Richmond, Virginia, the new Institute for Contemporary Art links the University with the community. As one of the nation’s leading schools of art and design, VCU has been central in the transformation of the surrounding neighborhood in recent years. At the corner of two main Richmond thoroughfares, the ICA has become a prominent marker in this newly invigorated area, welcoming more than 7,000 visitors during its opening weekend in April 2018 and hosting 175 public programs in its first eight months.

The building forms a gateway to the University with an inviting sense of openness. It opens onto the VCU campus as well as the surrounding downtown neighborhood through a double-fronted forum. The city-facing entrance is formed by an intersection of the performance space and forum, adding a “Z” component to the “X-Y” movement of the intersection. The torsion of these intersecting bodies is joined by a “plane of the present” to the galleries in “forking time.”

Since its opening, the ICA has been recognized with numerous awards, including the 2018 Historic Richmond and Storefront for Community Design, Golden Hammer Awards in the Placemaking Category, a 2018 AIA Richmond Honor Award, and a 2018 AIA Virginia Merit Award. In October 2018, the ICA was named Architecture’s A+ Awards 2018 Project of the Year.

Of the project, VCU President Michael Rao, said ““It’s kind of our front door, which is really nice. It’s obvious that you’ve arrive some place that’s really quite grand . . . It brings people together. There are lots of concepts here, and people are in a space where they can talk about whatever their feelings about anything. This becomes a great place to convene people, who might come from a wide range of views and perspectives, and give them the opportunity to really talk to each other in a civil way.” Joseph Seipel, the ICA Interim Director, also remarked, “It’s phenomenal. I literally get goosebumps when I came in here.”